Animal handling    The treatment of wildlife while under the direct control of a person.
Direct capture   The technique of obtaining control of an animal without the use of traps.

Animals can become extremely stressed when captured, approached, and handled by humans. Proper animal handling begins before the animal is captured. 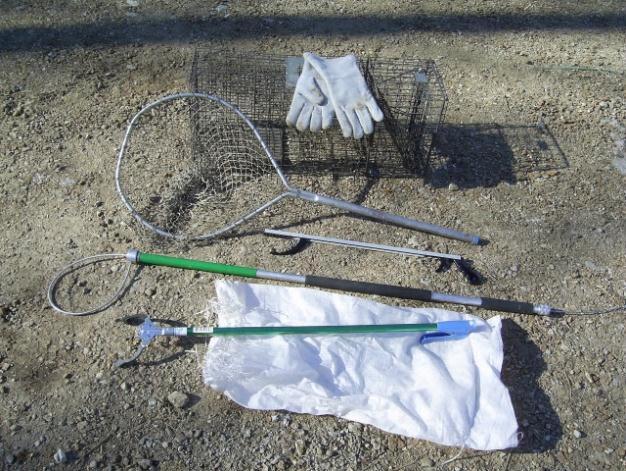 In New York, it is illegal for anyone, including NWCOs, to handle native snakes.

Catch poles (Figure 4), also known as snare, noose, or restraint poles, should be high quality with an instant open feature that immediately loosens the noose when activated. While it is important to ensure the animal remains firmly under control, cinching a noose around the neck or chest of an animal could kill the animal. Always treat animals with respect and have concern for their stress and suffering.
Have a cage trap ready before you use a catch pole to minimize the time the animal remains in the noose. Cage or box traps with spring-loaded doors are convenient, as you can set them in the upright position to allow for easy insertion of a noosed animal. When the animal is inside, close the door, immediately release the noose, and remove the pole. It takes coordination, but with practice you will be able to do this.

Hand nets, also known as landing nets, simplify animal capture by making it unnecessary to place a noose around the head of an animal. Choose a size that will fit diagonally into a raccoon-sized cage or box trap. This allows you to release the animal by simply inserting the animal, net and all, into the trap. Most animals will get out of the net by themselves. Monitor the animal out of public view as it escapes the net, being sure to remove the net and close the trap door completely after the animal is free from the net.

One of the most challenging situations during WDM is the capture and removal of an animal that is loose in a room. It may be a difficult task and you often have to do it in view of the client. If possible, do not have clients in the area where you are working, for the safety of both you and the client. Animals are unpredictable and the presence of additional people creates greater anxiety for all.
Some tips for catching a loose animal:

Catch poles, cat graspers, and hand nets are ideal tools for capturing raccoons. When cornered, a raccoon may hide its head and make itself difficult to capture with a catch pole. When this happens, gently poke the raccoon in the ribs and slip the noose around its head when it looks up in response. Raccoons are very strong and limber, so try to get the loop around the chest to avoid an escape (Figure 5).

Opossums are easily captured with a cat grasper or hand net.

Use covered cage traps or box traps to capture skunks.

Use snake tongs or a hand net to capture squirrels.

Move captured animals to your vehicle or otherwise out of public view as quickly as possible. This will reduce stress to the animal and minimize the risk of injury to well-meaning or curious onlookers. Ensure that the holding area for the animals is neither too hot (out of direct sun) nor too cold (out of rain, snow, or wind). In general, small mammals have a low tolerance to extreme heat or cold, while large animals (raccoon and larger) have greater tolerance. Minimize temperature extremes for all of the animals you manage. Sometimes, moving the traps and animals to a shaded area or out of the elements is sufficient. Always keep cages partially covered to help reduce animal stress.

Depending on the species, five choices are available for disposition of problem animals: on-site release, relocation, translocation, transport to a licensed wildlife rehabilitator, or euthanasia.
Moving wildlife is illegal in New York, however licensed NWCOs may move most species of wildlife. Snakes cannot be moved. Coyotes cannot be relocated without authorization from the DEC Regional Wildlife Manager. Rabies vector species (bats, raccoons, and skunks) cannot be moved without first consulting the county health department. You must have written permission of the landowner where the animal will be released. This applies to both private land and public land.

On-site release is the easiest and usually most convenient option. Open the trap and release the animal on the property where you caught it. Use caution when releasing animals to minimize injury to you and the animals. The following are some tips to help an on-site release go smoothly:

Relocation refers to moving and releasing an animal off the property where it was captured but within its home range. This is usually a short distance away from where it was captured. Some people think of relocation as on-site release
Translocation refers to moving and releasing an animal a greater distance from where it was captured. Translocated animals are no longer within their home range. Many people think of translocation as relocation.
If an animal must be moved, it should be moved as short a distance as possible. For the best chance of survival, the animal should be released within its home range.
Research has demonstrated that relocated and translocated animals suffer higher-than-normal rates of mortality, are more likely to repeat problem behaviors, and pose a risk of transmitting diseases.
Translocation is stressful and may be inhumane to released animals. When species such as raccoons and tree squirrels are released into an area where territories already are occupied, resulting disputes can lead to injury and death to both released and resident animals.
If moving the animal away from its habitat is the chosen and legal option for disposition, consider the following recommendations:

The following are suggested minimum distances:

Transport to a Wildlife Rehabilitator

If the potential for disease transmission is significant (many animals are rabies vector species and should not be moved), euthanasia may be the preferred option. Euthanasia, if required or necessary, must be performed in accordance with state laws. Guidelines for euthanasia have been established by the American Veterinary Medical Association (AVMA) but their application in field settings may be difficult. When euthanasia, as defined by AVMA, is not possible due to logistical constraints, animals must be killed in the most humane way possible (humane dispatch). Recommendations are available at http://icwdm.com. In addition, organizations such as the National Wildlife Control Operators Association and The Wildlife Society are working on guidelines for euthanasia in field settings.
Module 10 contains more information on euthanasia.