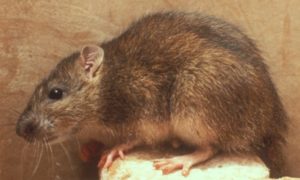 This exotic species may weight up to 1 pound. They’re 12–18″ long, from the nose to the tip of the tail. The tail is somewhat shorter than the body.

Signs of their presence:

Sounds: Squeaking, scuttling, scratching, or gnawing inside the walls, ceilings, or between floors of buildings.

Scat: 1/2–3/4″ long with blunt ends. Look in kitchen cabinets, drawers, and corners; on counters, under sinks, behind appliances, near food, and in cellars, attics, along walls in barns, warehouses, and feed storage areas. Use an ultraviolet light to look for their urine stains on woodwork (it glows blue-white). Rat urine smells musty and experienced NWCOs can distinguish it from mouse urine.

Runs, smudge marks: Rats use the same route over and over. Eventually, a faint, dark “trail” of body oil and dirt may be noticeable on baseboards and along walls, on beams, rafters, and pipes. Look as well for smooth, worn paths in insulation.

Nests and burrow holes: They will nest indoors and out. If outdoors, their burrows are usually about 1 1/2–2 ft. deep and 3 ft. long, with two or more entrances, and usually, a well-hidden escape route. Their outdoor burrows are often found in river banks and under sidewalks, platforms, boards, junk piles, foundations, and slabs. They may nest indoors in basements and the lower floors of a building, in crawl spaces, storage rooms, under floors, pallets, junk, and boards, or behind stored items. They may nest in sewers or storm drains. Rat nests are usually 8–12″ in diameter, made of shredded paper, cardboard, insulation, and bits of fabric or plastic. Their burrow holes are usually 2–4″ wide.

Damage to stored goods and buildings: Gnaw marks are often seen on the bottoms and corners of doors, on ledges, in the corners of walls, and on stored materials. Look also for holes and piles of wood shavings. Check cabinets, electric cables, pipes, baseboards, window casings, and foundations. They will gnaw on almost any building material: wood, cinder blocks, aluminum, sheet metal, glass, adobe, asbestos. Their teeth grow constantly, so they gnaw to keep them trimmed.

Evidence of their feeding: Rats are steady feeders, and will settle down and eat large quantities at a sitting. Their leftovers are usually half-eaten pieces of grain. Rats need water every day. May see and smell scat and urine.

Social style: Generally colonial, with an established hierarchy, although you may find solitary rats.

Daily activity: Nocturnal. If populations are very high, they may be active during the day, too.

Distribution in NY and the Northeast: Widespread, in urban, suburban, and rural areas. Rats are generally found near people. Though many people think of rats as an urban problem, about half of North America’s rats live on farms.

Habitat: Any building that provides food and shelter, usually in the basement and on the lower floors of the building. They’re found in apartment buildings, homes, kennels, warehouses, stores, slaughterhouses, barns, livestock buildings, silos, granaries, even sewers and dumpsters. Rats will nest underneath buildings and concrete slabs, along stream banks, around ponds, and in dumps. They like to nest near water.

Territory and home range: Territorial, especially among males. Daily, rats will travel through an area that’s up to 100–150 feet in diameter, more than ten times the size of the foraging range of a house mouse. Rats generally stay within 300 feet of their burrows.

Breeding dates: Peaks during the spring and fall. Females may breed again within a day or two of birthing and may produce 4–6 litters a year.

Weaning dates: Between 3–4 weeks of age.

Amount of time young remain with parents beyond weaning date: Not long!

What are they doing?

It’s critical to consider how well rats climb, jump, and swim when planning your control strategy. If you had the physical abilities of a rat, you might be an Olympic athlete. Here’s what a Norway rat can do:

Jump vertically about 3 feet and horizontally 4–8 feet, depending on whether they start on a flat or elevated surface. If people could match that, they’d be jumping about 18 feet up or 24–48 feet out, without poles or a running start.

Stretch up about a foot on a smooth wall.

Swim up to a half-mile in open water, underwater for about a half-minute; against strong currents; and up through toilet traps (water seals). Rats can tread water for up to 3 days.

Burrow 4 feet into the soil.

Fall from a height of 50 ft. without serious injury.

Gnaw through lead and aluminum sheets, cinder block, plastic, and other materials.

The best way to deal with a rat infestation is to clean up, get rid of the rats, and keep them from finding a way back in. Keep three words in mind: sanitation; eviction; and exile.

Garbage is usually the main food source for rats in urban areas. Ideally, garbage would be removed daily, before dusk. This often isn’t possible, so make sure that garbage is kept in secure containers.

Clean garbage cans, dumpsters, and chutes regularly, at least once a week.

Screen the drainage holes in dumpsters with 1/2″ hardware cloth.

Steel garbage cans are a better choice than plastic, which the rats may chew through.

If rats, raccoons, or dogs tip over the garbage cans, either use a spring-loaded fastener or bungee cord to keep the lids on, or put the garbage cans on a platform that’s 18″ above the ground and 3 feet away from buildings.

At a dump, cover the garbage with soil every day.

Near buildings, rake up and dispose of fruits and nuts that fall from trees. It’s not a bad idea to wrap these trees with sheet metal, so the rats can’t climb up and feed in them. Prune low-hanging branches, too.

Store large bags of flour, grain, pet food, or livestock feed on open-wire shelves. Bottom shelf should be at least 18″ off the ground.

Especially in kitchens and food storage areas, elevate equipment (mixers, stoves, refrigerators) so you can clean underneath it easily. If you can’t elevate it, then close it off so the rats can’t get underneath the equipment.

Keep the area around and underneath bird feeders clean, especially of spilled seed. Use baffles to keep rats (and squirrels) out of feeders.

Other lethal techniques, for NWCOs with a commercial pesticide applicator license: